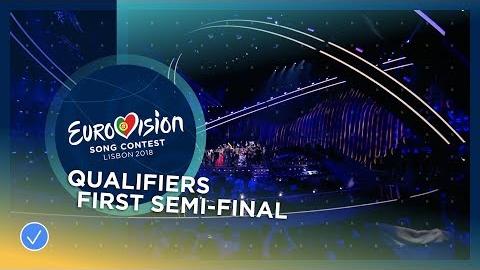 What a night for Eurovision, one of the toughest semi-finals ever and some interesting results. In this article we'll try to dissect what happened and where we go from here, who do we think won the semi and did we see the grand final winner perform last night?

We were a little preoccupied at the start of the semi frantically fixing the Instagram stats which had died sometime over the past week so I couldn't get a few of the less-than-30-minute stats on the site immediately - we still have the raw data though so will populate the Instagram table soon with all the results. Overall though, we were pleased with how things went. On the 30 minute scale TellyStats got 9/10 qualifiers on the Facebook and Twitter stats, 8/10 on the Instagram stats and 6/10 on the YouTube stats.

All stats from the 30 minute scale.

These aren't necessarily the best stats to use, for example I personally prefer YouTube Likes over Views as it takes a tiny bit more interaction and commitment from someone to hit the 'Like' button on a YouTube video than it does to simply watch it. Anyway, TellyStats always has to emphasise, stats are a guideline, they're an accessory, not gospel - you get a general idea of our successes and failures from the table above.

No surprises for the top 5, Cyprus, Israel, Czech Republic, Estonia and Bulgaria - most people were confident they'd progress, top 10 on all 4 platforms it wasn't difficult to bag yourself an easy 5% - 15% return on your cash. The bigger issue lay in identifying value in the rest of the entrants, too many potential qualifiers vying for too few qualification spots.

Lithuania were top 10 in all platforms which gives a high (but not absolute) degree of certainty - either way it had us piling onto it's "To Qualify" odds. We'd found the music video boring and like most Eurovision pundits didn't even have it classed as borderline, but last night's semi was proof of how important context is when reading stats. The staging, what a masterclass - no frills, lots of close-ups and very intimate. Couple that with excellent stats results and it was our biggest win of the night, who'd have thought?

Similarly with Finland, there had been positive reports flying around about the jury performance, when Finland hit top 10 on three of the stats platforms, it was time to stick some cash on it. Finland didn't fall below 1.75 on Betfair to qualify, closing at around 1.9. Same with Albania, it was at 4.5 to qualify when the market closed - in the top 10 on two platforms on the higher end of the tables. We threw some speculative cash at it at around 4.6 and were pleasantly surprised.

The big shock of the night though was Ireland, our review was generally positive, noting that on a personal level we hoped it would progress (but it was doubtful). Again staging came through for them, we thought they'd play it safe and have a male-female couple dancing on stage, but kudos to them for going with male-male, forcing non-progressive Europe to suck it up. Along with Cyprus, the gays came out in force for Ireland.

We can't just extol our good results, Greece was top 10 on all platforms and crashed out. We'd backed them to qualify but bailed for a small loss pre-show after reading too many negative reports of the jury performance on our News page. There was no choice but to be skeptical about Greece after that. Greece gave a not-great performance but went on to get high stats figures anyway - this is a classic sign that stats are being misrepresented, now we know for sure that Greece has an active diaspora online that will go crazy on social media for even a poor performance. On the flipside, Lithuania and Albania exceeded it's low pre-show expectations and got high stats figures to back it up, this is when you should be backing them as it's the epitome of value.

Let's start with the top of the market, only 1 of the 5 'big' acts met expectations and that was Cyprus, all others fell short and their odds drifted as a result. We see this all the time in reality TV such as Strictly Come Dancing with your Danny Mac's and your Natalie Gumede's - if you're incredible, you have to be incredible every time, the only other direction is down - and that's what happened to Israel, Bulgaria, Czech Republic and Estonia. We did say you had to have your head examined backing Israel at 3.00, the market now has them at 7.6. This isn't to say they're out of the running but the performance needs work, the fake-looper we highlighted was also an issue.

Cyprus was the big story of the night though, topping 3 of our stats platform tables it almost certainly won the semi (unless that Greek diaspora gave them a boost too - which is possible). We got a bit of triumphant abuse from Cypriots on Twitter as Cyprus approached favourite in the market for our review of 'Fuego' but we stand by it - of the staging, dancing and the song itself, the song is the worst of the three. The pyro effects and the Beyonce-dancing are the real selling point of this track, reading through Facebook comments suggests this is the general consensus too. Do we think it'll win? The honest answer is we don't know, it likely won the semi so it stands a decent shot but the best move would be to wait to see the stats during the grand final before placing a significant position - that's what we'll be doing anyway. In our opinion, it'd be a sad sight to see Salvador Sobral, who famously used his victory speech last year to implore Europe to ditch plastic pop - handing over the trophy to Cyprus.

The grand final results for the rest of the entrants are fairly clear cut, Ireland, Albania and Austria well into the right-hand side of the results table with Finland still on the right-hand side but probably somewhere between 14th - 17th. The first-half of the grand final is going to be a slow-song snoozefest but Lithuania is one of the few slow songs that does actually succeed in hitting you in the feels, so possible a top 15 result for them. From this semi, only Israel and Cyprus have a chance at winning, the rest will be spread around the top 10.

Before we talk about the next semi, let's touch on the Big 5, Spain, Portugal and the United Kingdom performed last night. Portugal and the UK's chances can be ignored. We can reveal though that Spain's YouTube video of the performance got 46,278 views and 4,975 Likes in 1 hour. This is more than Israel but less than Cyprus on both measures. However Spain's performance wasn't aired on TV which makes the comparison more difficult. It fits with Spain's good YouTube stats for it's second rehearsal and it's official video though. Either they're a contender, or the Spanish diaspora is coming out to boost their numbers too. Time will tell.

In terms of the next semi, Rybak for Norway is an excellent performer and, unlike some other frontrunners, will live up to that expectation on the night (and likely take the win). We're also pretty confident Moldova, Ukraine, Poland, Sweden and Australia will progress. Sweden at 1.04 is a lay for us to back again at a higher price on the night (maybe around 1.15). We had a speculative bet on Slovenia to qualify at decent odds but don't hold out much hope. Beyond that we're hoping that the sheer number of supposed no-hopers in this semi means the stats reveal some juicy value. Make sure you're here at TellyStats.com on Thursday night.